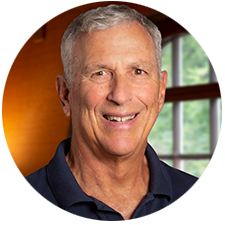 Larry Miller founded Apnimed in 2017 with Drs. Andrew Wellman and Luigi Taranto and serves as CEO and Board Chair. Previously, he was co-founder, CEO and Board member at Macrolide Pharmaceuticals, a company developing novel antibiotics. Since 1991, has founded or co-founded 9 additional life sciences/healthcare companies including HPR, Avicenna, PharMetrics, ImpactRx, Serenex, Optio Research, Tetraphase and Activate, and has served as CEO or Board member or both in each case. Two of these companies completed public offerings and seven were acquired. He also co-founded the Mediphase funds, where he led investments in both private and public life sciences/healthcare companies, having served previously in a similar role at Hambrecht & Quist Capital Management. Dr. Miller received an AB from Harvard College, an MD from Harvard Medical School, and completed clinical training in internal medicine and pulmonary disease at the Massachusetts General Hospital. He is Board certified in Internal Medicine, Pulmonary Disease, and Clinical Pharmacology.